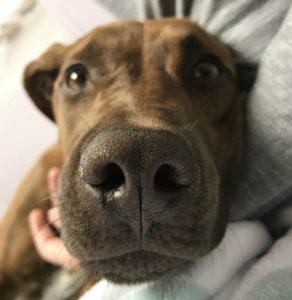 On a Tuesday afternoon in late September, we received a call that a 6 month old puppy had been attacked by an alligator and was on the way to our hospital. My staff and I prepared ourselves for the worst, not knowing exactly what to expect, not knowing that the next few hours and the days to come would be some of the most challenging and ultimately rewarding of our careers. Within a month, our little patient’s story was shared worldwide! She is amazing and deserves to be famous- we all have something to learn from Chloe…

She had been playing in her own backyard, which borders the Ulumay Wildlife Sanctuary. The water was much higher than usual following Hurricane Irma and after Chloe wriggled past a neighbor’s fence, she was dragged in by a waiting alligator. Her owner heard a horrible noise and ran outside to see Chloe fighting for her life. The gator kept pulling her under water but Chloe had grabbed onto a branch with her mouth and was eventually able to escape and swim to safety.

Throughout that afternoon, our entire staff worked to save her life. Her injuries were extensive and we were not sure that Chloe would survive the first night. Her care remained very intensive for the first few days and we had several small setbacks. Ultimately, she ended up needing four separate surgeries. We tried very hard to save her leg but the damage done by the repeated alligator bites was too much for her to bear and we had to amputate her leg 12 days after the attack.

The thing that is remarkable about Chloe is not just that she managed to survive, which would be compelling enough. The most amazing thing is that Chloe’s spirit is just as strong as her body. She refused to give up! And despite her injuries and the pain involved in the care we had to administer, Chloe never tried to bite us. Instead, she greeted us with a wagging tail and kisses every time she saw us!

The day after her amputation, Chloe literally jumped out of her cage and trotted to the front of the hospital to let us know that she was ready to go home. She acted as if she had never had four legs! She is a great example for all of us. Chloe just takes everything as it comes- never complains, never holds a grudge, never has anything but love to offer. If only everyone in the world could be more like Chloe!!! – Written by: Dr. Elizabeth Chosa