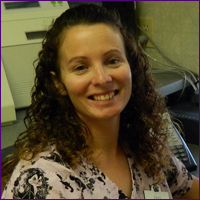 Dawn is a native Floridian, raised in Cocoa Beach. In addition to being a receptionist at Courtenay Animal Hospital, Dawn is a cat lover and an advocate for Autism Awareness. She and her children, Desirae and Devin, share their home with four cats: Jasmine, Shelley, Tigger and Jessie. 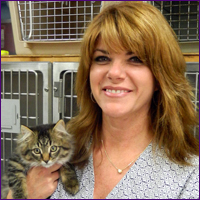 Monica was born and raised in Merritt Island! She is a true animal lover and shares her home with her dogs Bubba, an Old English Bulldog, Rosie, a Toy Poodle, her cats, Buttons and CC, and an Eclectus parrot named Rafiki. Monica has worked as a receptionist at Courtenay Animal Hospital for years. In her spare time, Monica enjoys running, baking and spending time with her husband Chris and children, Nicole and Tanner. She also works closely with the Florida Parrot Rescue group. 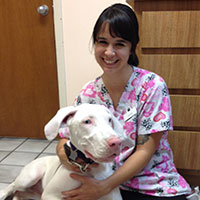 Jackie is a native Floridian, born in Sarasota and living in Rockledge now with her husband, daughter, cat, dog & fat-tailed gecko! She has been a life-long animal lover and is happy to be fulfilling her dream of becoming a veterinary technician here at Courtenay Animal Hospital. 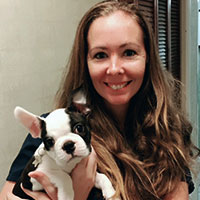 Christie joined our team as Practice Manager in August 2015, after accumulating over 17 years of veterinary experience. She received her veterinary technician license in Virginia in 2002 and relocated to Florida with her family in 2006. She worked as a technician in a local veterinary emergency practice for several years before being promoted to Hospital Manager. When she isn’t working, she enjoys spending time with her husband, two children, and their furry family! Her family includes 2 dogs, Prince and Zazu, a cat named Gracie, and a bird named Deedee. She also enjoys the beach, fishing, traveling and horseback riding.

Kari was born and raised in Wisconsin and relocated to Florida in 2015. She is a certified veterinary technician and has worked in small animal and exotic practices for over 10 years. She has a special interest in animal welfare, behavior and wildlife conservation. In her spare time, she enjoys the outdoors, spending time with friends and family and volunteering at a wildlife rehabilitation center. Kari and her husband have a Springer Spaniel now and her dream is to someday have a small family farm to provide a home for animals in need. 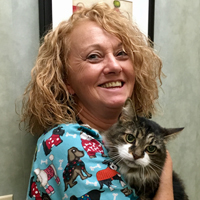 Donna moved here from the mountains of northeast Tennessee, where she had lived her entire life. She has over 16 years of veterinary administrative and clerical experience and is a wonderful addition to the CAH front desk! Donna and her husband Jerome decided it was time to trade the mountains and snow for the beaches and sunshine. They brought along their two cats (Festus and Clarice) and their Rottweiler (Doctor). In her spare time, Donna enjoys boating on the lake and lazy days at the beach. 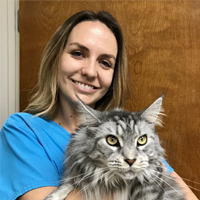 Amanda is a native Floridian, born and raised in Port Saint John. She has worked as a veterinary hospital receptionist for 8 years and joined our Courtenay Animal Hospital family in early 2013. Amanda, her husband Jonathan and their son Jamison live with their four cats, Splotch, Franklin, Orangie and Pigeon. In her spare time, she enjoys reading and gardening.