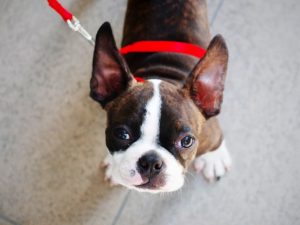 Many items, such as mercury thermometers and drop-side cribs, were once widely used but have been virtually eliminated due to known safety hazards. It is my hope that retractable leashes will eventually be added to this list!

The concept seems great: these leashes allow dogs to have greater freedom than a traditional leash but still provide the human handler some degree of (perceived) control. So what is the problem? Although you may pay close attention to your dog, a retractable leash provides minimal control. It only takes seconds for a dog to dash into the street or jump onto another human or animal. I have personally seen two dogs hit by cars while still on the end of these leashes. I have also seen numerous dog fights occur while one or both dogs are on retractable leashes and too far away for the handler(s) to stop the incident. A retractable leash’s locking mechanism may also malfunction, leaving the handler with no control over the dog, who may be as far as 30 feet away.

When handlers do realize that dogs are in danger, they often react by jerking on the leash, which can severely injure a dog’s neck or spine. These injuries are much more significant than those seen with traditional leashes. Sudden movements can also snap the thin cord of the leash, endangering both the dog and the handler, either of whom may be hit with the end of the broken leash when it whips back.

Other human injuries are also well-documented. Many handlers have been knocked down or received deep lacerations to their hands, legs, and arms by these leashes. Some have even had fingers amputated when they became tangled in a retractable leash! Dogs have sustained similar serious injuries to their legs, necks, bodies and faces. A simple Google search yields enough gruesome photos to deter the average person.

Finally, if a handler drops the leash to avoid such injury or the bulky handle slips out of her hand, the leash will often retract and the handle will forcefully hit the dog. Even if a serious injury is not sustained, the leash handle may appear to “chase” the dog, terrifying him and/or causing him to run further away.

Most veterinarians and pet advocates agree that these risks are not worth taking. A traditional six foot leash is better for training and much safer for everyone!!